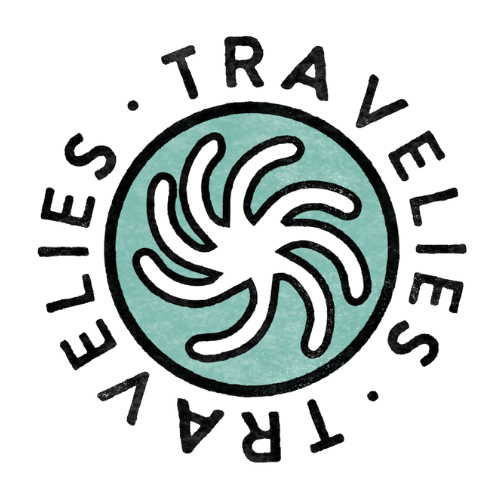 When people ask me what my most special travel experience was I find it hard to choose as I am lucky enough to have plenty of options to choose from. But believe that the most special experience I had was the time I sailed along the coast of El Chocó in Colombia. People always ask me about why this is the most special travel experience for me. I can’t deny I enjoy the look on their faces when I tell them this was a 24 hour boat trip, of which I spent the majority either puking off the side of the boat or in foetal position in a tiny bunk bed. Nonetheless, sailing along the coast of El Chocó from El Valle to Buenaventura on a cargo ship was very special to me and I will tell you why.

El Chocó is a region on the Pacific coast of Colombia. The reason I wanted to visit this area in the first place was because there are beautiful dark beaches, decent waves for surfing and you can spot animals like turtles and whales from June to October. It is hard to reach the villages along the coast because they are not connected by roads. The only way to reach these villages is either by airplane or boat. Flights to El Valle and Nuquí depart from Medellín. I try to avoid flying so I started looking for alternatives. Not much later I found out there is a cargo ship that departs from Buenaventura to El Valle and visa versa each week that takes about 25 passengers.

Getting your ticket to sail along with the cargo ship is not an easy task. Unfortunately I did not manage to get one from Buenaventura. As I did not want to miss out on this beautiful area I took a flight from Medellín to El Valle and from there I started my second attempt on getting a ticket to hop on this boat. It was going to be hard because the cargo ship only sails once a week and takes a limited amount of passengers. In order to obtain a ticket I grew my social network in the area until I accidentally stumbled upon the right person. I befriended the friendly owner Eduardo of the pulpería in El Valle and he referred me to the right person to buy a ticket. 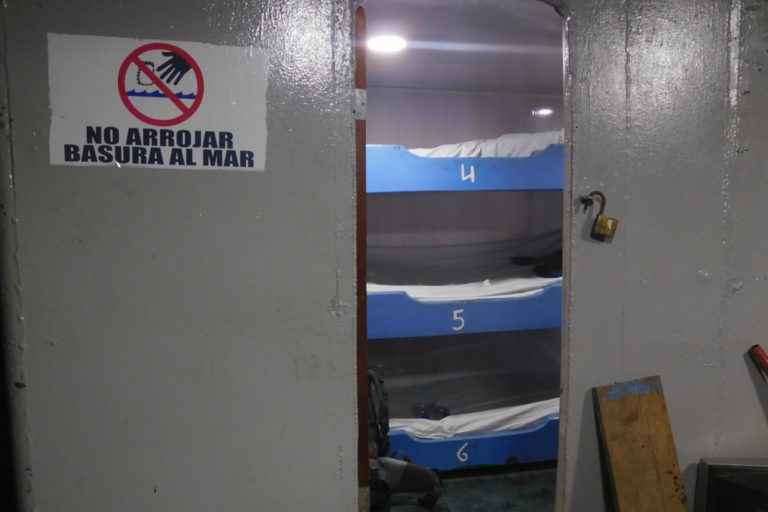 Before departure I learned that the cargo ship is managed by captain Óscar and his wife. His wife takes care of the meals for the guests and crew on the ship. I understood the crew works on the ship and therefore does not have to pay for the ticket. The cargo ship mainly transports empty bottles from El Valle to the mainland. From the mainland to El Valle it usually transports food and drinks. The 25 passengers including the crew sleeps in beds like in the picture above and captain Óscar and his wife sleep in a separate cabin.

YOU WILL NOT BE LATE FOR THE BOAT

During my trip I got used to Latin American punctuality but somehow my Dutch mind kept telling me that I would be late for the boat. Therefore, I decided I should be in the harbour an hour before the departure of the boat. The night before the departure I stayed in the village Bahía Solano. Bahía Solano is an half hour ride by TukTuk from El Valle where the ship would depart from at noon. To celebrate my last night at the Pacific coast I drank local rum with fresh coconut milk. In retrospect this wasn’t the best idea, since my head was pounding the day of departure and I overslept. I woke up to the honking of my TukTuk driver which scared me to the point that I fell out of my hammock. I grabbed my belongings as fast as I could which I started pushing down in my backpack, while two crabs were crawling out of my backpack (yikes!). 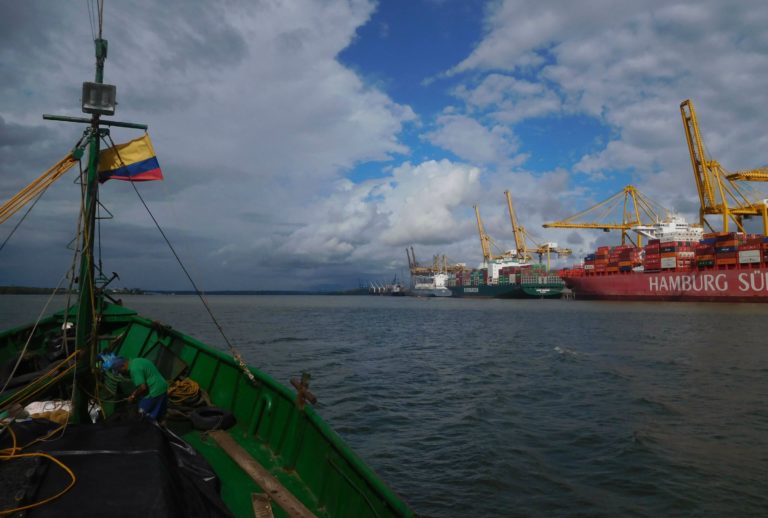 10 minutes later I ran to the beach where the TukTuk was parked. I jumped in the back and screamed ‘VAMOS’! The driver hit the gas as hard as he could but nothing happened. We called in help and started pushing the TukTuk out of the sand but nothing seemed to work. The poor man’s TukTuk was broken. He called another driver who would pick me up in half an hour. By then it was already 11:30 and I only had 30 minutes until the departure of the cargo ship. The commotion helped me to forget about my hangover. The only thing I could think about is how sad it would be to be late for the departure of the boat. 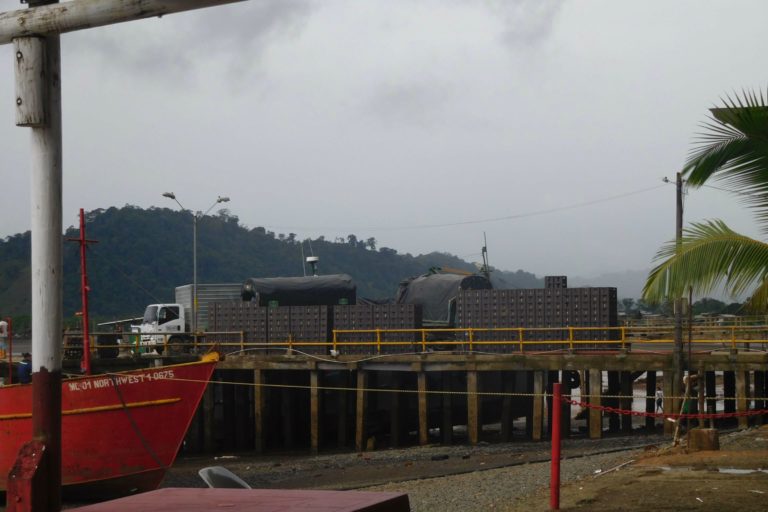 Half an hour later the other driver arrived. The trip from Bahía Solano to the harbour of El Valle was very stressful because of the rain and the fact we were running late. We also had to pick up gasoline on the way which took a very long time so I decided fill up the tank instead of the driver. This was harder than it seemed and it turned out I do not have a talent for pouring gasoline in a vehicle through a funnel using a jerrycan. During the trip we pushed the TukTuk out of the mud twice. 12:15 we arrived at the harbour of El Valle. I was very relieved to see the cargo ship had not left yet, but the cargo ship was not the only thing I found at the peer. The peer in the harbour was stacked with empty crates which still had to be loaded on the ship. This could only mean one thing: the boat would not leave before it was loaded with its cargo. In the end I waited 7 more hours in the harbour until the boat departed.

THE JOURNEY BY BOAT

Most passengers arrived at the harbour around 3 in the afternoon. Some helped loading the cargo, others were patiently waiting until the departure of the boat. The passengers consisted of mostly young Colombian men, but there was also an older man from Venezuela and a family. It was nice that the passengers were very interested to hear my story but they were very open to share their stories too. Around 19:30 we all boarded the ship and I could not wait to go to bed, I was exhausted after this day. 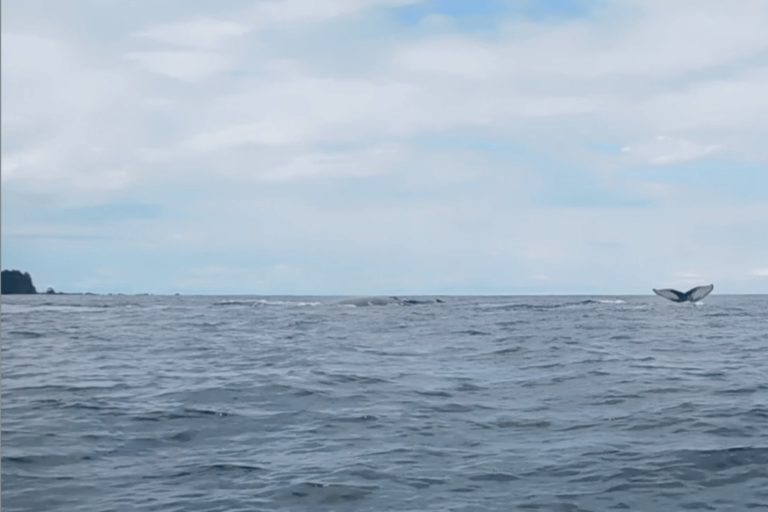 The next morning I woke up around 7 or so because one of the kids wanted to show me something. I must admit that it was hard to get out of bed because I was feeling seasick. But I could not have been more grateful, because the kid dragged me out of bed to see whales. This was one of the most spectacular moments of this journey: on one side I saw dark beaches surrounded by jungle and on the other side the ship was surrounded by whales. We made some stops on the way at another village along the coast to pick up more cargo. Luckily the loading process was a lot faster than in El Valle.

After 24 hours the ship arrived at its final destination: Buenaventura. Buenaventura is known for its big harbour and the lack of safety. One of the passengers on the ship agreed to share a taxi with me to the bus station to make sure I could take a bus to a safer destination. Our arrival was interesting, as the peer was way too high for the boat and we had to climb a ladder with our luggage to get off the boat. Up to this day I wonder if they unload the cargo at this peer. Besides the fact I was sick during the whole trip on the cargo ship and I spent most of the time puking or sleeping, I only have positive memories of this experience. It was very special to meet the captain Óscar, his wife and the passengers on this ship. It was also amazing to spot whales and I also saw some dolphins. I felt blessed to be able to sail along the coast of El Chocó on a cargo ship and I would do it all again.

Did I enthuse you about skipping a plane and visiting the Pacific coast of Colombia by cargo ship? Great! Please note it is important to plan your journey in advance. The cargo ship departs twice a week: Tuesday afternoon at 12:00 from Buenaventura to Bahía Solano and Saturday afternoon at 12:00 from Bahía Solano to Buenaventura. The departure times may vary depending on the tides. Book your ticket with Transportes Renancer. The ticket cost $COP 150,000  (about 43 euros). The ticket includes a place to sleep and 3 meals consisting of rice and fish and a cup of tea (breakfast, lunch and dinner). Be aware you are hitching on a cargo ship, don’t expect luxury or vegetarian options.

5 x tips to purchase a backpack that suits you 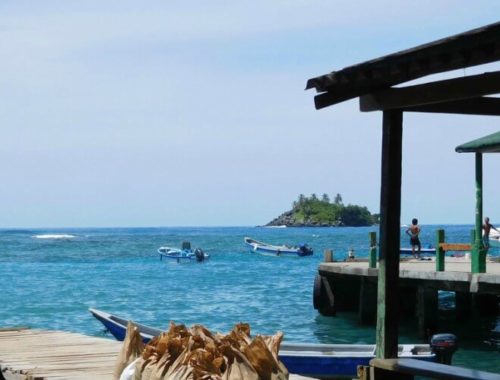 Capurganá, a hidden gem for divers 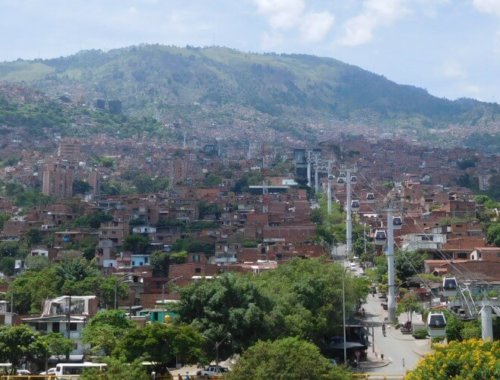 Medellín: 5 x things to do + where to stay 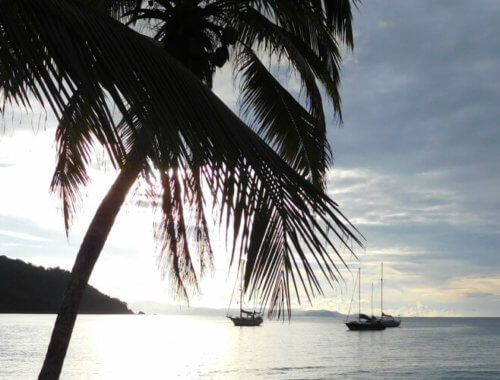 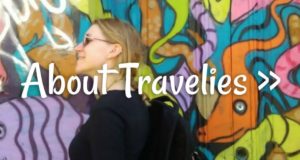